a picnic
in a time of panic—

a mosaic made
in monochrome—

as with
bubbles and lichen
that share
a DNA—

of luminosity
beneath
the scrutiny
of damp light

From Buffalo poet, editor and librarian for the Poetry Collection of the University at Buffalo, Edric Mesmer, comes the poetry collection now & then (BlazeVOX, 2020), following numerous chapbooks from presses such as PortablePress @ Yo-Yo Labs, Destitute Press, Red Glass Books, PressBoardPress and Seapressed/ meta. The poems in now & then are focused on small moments stretched across breath, space and the fragmentary lyric. His is a broken cadence, rhythmically spaced across the page. “tasking cant / with its own / decryption—” he writes, as part of “abraca—,” “to think of then / subsumed in / now— [.]” In the opening note on the poems, he writes:

These poems fall all too neatly into two sections, the eponymous “now” and “then.” I feel the “now” poems, all from the early months of 2020, share a returning-to work the “then” poems, some of which were written as long as 20 years ago. That they have come together so squarely—so circularly—(at least to me), speaks to a sympathy between then and now. I hope that the reader will also find this to be true. 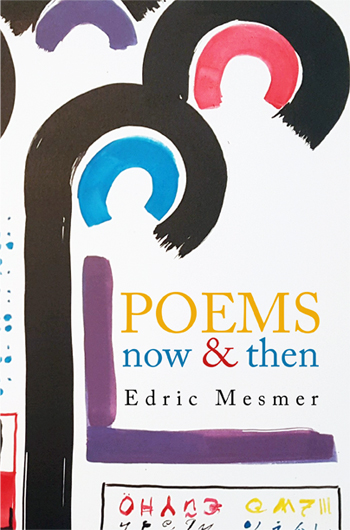 There is something interesting in a poet who is not in a hurry, composing a series of occasional, individual poems over two decades that cohere so well into a single project. The poems utilize halts, rhythm, fragments, breaks and pauses to move carefully, thoughtfully, across thought and language, moving one step and then one more step. This is careful, methodical and thoughtful, and yet, with a sense of wry play. As well, I can occasionally here the cadence of poets such as the late Toronto poet bpNichol in some of his lines, such as in the poem “enisled—,” that begins:

yet of the everything—

ness , a shore to
tread—