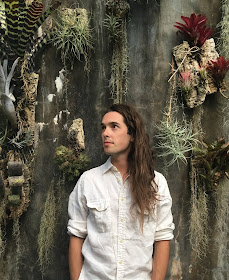 Dennis James Sweeney is the author of Ghost/Home: A Beginner’s Guide to Being Haunted, as well as three other chapbooks. His writing has appeared in Crazyhorse, Five Points, Ninth Letter, The New York Times, and The Southern Review, among many others. He is a Small Press Editor of Entropy, the recipient of an MFA from Oregon State University, and a former Fulbright fellow in Malta. Originally from Cincinnati, he lives in Amherst, Massachusetts, where he is a PhD candidate in Creative Writing at the University of Denver.

The feeling I had when I found out What They Took Away was going to get published is a feeling I've been trying to get back to for the last seven years. I liked that little chapbook, and magically, someone else liked as much as I did. But I think my relationship with my writing was very unconscious then. I wrote without intending. It was amazing to see someone approve of that.

Now, I'm much more intentional about what I write about and how. That comes with more disappointment, because if it isn't lovingly accepted I am too invested in the work to let the rejection go. But in the long run it's better, because if/when my writing does get published, I am committed to accompanying it into the world. I want to share it because I have poured myself into it, instead of being a little frightened of it, as I was with What They Took Away. My new chapbook, Ghost/Home: A Beginner's Guide to Being Haunted, does scare me, but it is a fear I know how to carry.

Poetry has always been revelation for me. I began writing with fiction, but only because that was the form that found me when I was ripe to begin. When I found poems that I loved—when I saw Dorothea Lasky read in Boulder, and when I read Emily Kendal Frey's Sorrow Arrow—they gave me a sense of total possibility.

I always think I'm a fast writer, but I'm never done when I think I am. I'm only just beginning to view my initial attempts as skeptically as I should. That means revising is mostly emotional work, these days; once I've convinced myself that a work is not golden, the changes I need to make seem surprisingly clear.

It's always a book. That's my unit of reading, which is why I write that way. A style or form comes to mind to contain an obsession that has already been brewing—and I'm off, and the form holds, then breaks, which is how I know I can keep going.

I like readings because I know I'll never be as nervous as I used to be. It's amazing: to stand and read from a page that you've nearly forgotten you've written. It's like reading someone else's work. That's the other reason I like it. I feel like the person I have a responsibility to is not me.

Theory doesn't guide my work. Internal conflict does. All my questions are ones I don't have the words for.

I think your role as a writer depends on who you are. For me, a white man with familial wealth and a chronic illness, my role is to question the conditions of power that have given me the privileges I have. This usually means telling the story of some form of conflict or difficulty that I've been through myself, because these conditions of power create impossible-to-resolve situations even for the people who benefit from them.

I want to use my privilege to contribute to its dismantling. I want to put myself on the line, because many qualities that I've inherited contribute to my own suffering and the suffering of others.

Both, although I've rarely done it. I hope that when working with an editor becomes more regular for me, I have the courage to appreciate it. More likely I'll resent it.

Writing advice comes to me through osmosis rather than language. The best writers I know...just give off this feeling, which doesn't have to be named. I just know I need to cultivate the same feeling, and be precious with it, and allow it to guide me.

10 - How easy has it been for you to move between genres (poetry to fiction to essays)? What do you see as the appeal?

My best two hours are in the morning, after having a smoothie. After that it's harder and more variable. But if I get those two hours in, that's enough to feel good about my day.

When I get stalled, I just keep writing very badly, and very angrily, until I have a crisis and stop for several weeks. To my amazement, rest actually helps. I never thought I'd be quoting Banksy, but a friend of mine told me about this quote that I remind myself of frequently: "If you get tired, learn to rest, not to quit."

Skyline Chili. You never smell it anywhere outside of Cincinnati, but sometimes there's just the right combination of spices coming out of a restaurant somewhere else. It stops me in my tracks.

My partner and I have been realizing recently how much we have inherited from the music we listened to when we were younger. The Modest Mouse influences are clear, I think, in the slightly off-kilter quality of my writing, and its desire to be both weird and pleasant to listen to. I'm less sure how bands like Brand New and Taking Back Sunday fit in, but Jess Row's essay on emo in White Flights might have something to say about that.

I have a very bad memory, and a very high level of enthusiasm, so whatever I'm reading is always the thing that's transforming my thinking and my work. Here's a few small press books I've been amazed by recently: Schizophrene by Bhanu Kapil, from Nightboat; All Hopped Up on Fleshy Dum Dums by Lara Glenum, from Spork; Under the Knife by Krista Franklin, from Candor Arts; NOS (disorder, not otherwise specified) by Aby Kaupang and Matthew Cooperman, from Futurepoem; Tender Points by Amy Berkowitz, recently reissued by Nightboat; Poems (1962-1997) by Robert Lax, from Wave; Days by Moonlight by André Alexis, from Coach House; nothing fictional but the accuracy or the arrangement (she by Sawako Nakayasu, from Quale Press.

I feel grateful to be alive at a time when works like these are accessible and flourishing.

I'm a bit superstitious about how I respond to questions like this. I'm grateful for everything. I don't need any more than I already have.

My dad sells insurance. I think if I had gone down that road, which I never even considered, I would be very good at it. It would be hard, and I would probably long for something else, but I would also be pretty happy.

I was lucky. I made the decision to write before I knew what I was getting into. Happily, I didn't know how hard it was until I was too far in to quit. I am thankful to my past self for whatever made him choose this path—probably some combination of hubris, imagination, and a desire to be listened to.

For books, see question 15. As for film, I don't know much. But I saw Czech new wave film called Daisies at a writing residency recently. It was strange and good.

A memoir in essays about living with Crohn's. And poems, when I can't fit myself into prose.