In 1995, Washington Review published a germinal interview (“You Can’t Stop Us; Three Independent DC Publishers”) of Buck, Rod Smith and Mark Wallace, featuring Mary Swift’s iconic photograph of the three. In the interview, Buck stated, “It’s hard for me to understand why people wouldn’t be interested in poetry with language that isn’t like everyday language.”

This sort of defense of “language” poetry probably also describes why Buck’s work settles so soundly into the orbit of the avant-garde. Buck’s poetry is like everyday language and not like everyday language. It is conceivable speech, devoid of pretext, but wrapped in complex, syncopated lyric invention and no small portion of mystery. It surprises as much as it allows readers or listeners to identify. (Heather Fuller, “Introduction: this was preserved by someone / who thought it would be of use…”)

After being aware of his work for a couple of years now (and producing two chapbooks of his work through above/ground press), I’m pleased to have the opportunity to get a wider overview of Washington, D.C. poet Buck Downs’ writing through the volume Unintended Empire: 1989-2012 (Baltimore MD: Furniture Press, 2018). Unintended Empire collects from a period of intense activity, including work produced in small books and postcards, most of which, if not all, being self-produced, and distributed in part or in whole via an extensive mailing list. As he mentions in an interview at Touch the Donkey: “I started using Lulu in 2005, because printing out 150pp docs on my inkjet printer & punching them for a three-ring binder is tedious.” Further on in the same interview, he discusses how manuscripts are organized, offering:

I’ve more or less abandoned the idea of organizing a manuscript; one more place where I get to trust the material, and the readers. Poems now are simply stacked in chronological order, and if something seems like it’s out of place, it gets removed. 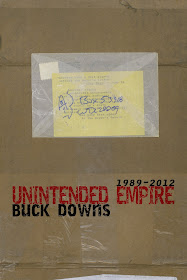 The author of full-length books such as Marijuana Soft Drink (Edge Books, 1999), Ladies Love Outlaws (Edge Books, 2006), and Tachycardia: Poems 2010-2012 (Edge Books, 2015), Downs’ selected/collected pulls from a wide range of material, or at least as the table of contents would suggest, with thirteen titles under the second section, “ASSORTED BOOKS OF BUCK DOWNS.” While a bibliography of titles from whence the poems here are collected aren’t essential to engage with the work, it certainly would be helpful, at least in terms of certain kinds of context. While some pieces make for guesswork, the most obvious and overt comes from the title of the fourth and final section, a section that shares a title with his 2015 title from Edge Books.

all dissolved her
spots and furze
we got here curious, & tired

newblown radical
river through everybody

her pleasure is all mine
my god is a steady supply —

One thing that I have appreciated from and enjoyed of what I’ve been aware of Downs’ work, being far more recent than much of this, has been in its casual looseness, able to ride the cadence and language, if not to any kind of conclusion, to at least a place where the poem can end. The ways in which his poems connect to each other, also, is intriguing, given his preference for putting manuscripts, and therefore books, together in the order in which they were composed, and one could even see Downs’ work as a kind of open-ended, singular project, one that will only end when he does, akin to that of the late Vancouver poet Gerry Gilbert. These are poems of connection and connectivity, composed, intentionally or otherwise, as a singular, life-long poem that, if not directly writing a life, writes through, around and directly with the essential elements of that same life.

they are managing the division
of the empire now, almost
without knowing it since it
will never make the news, cupping
each other in their hands, like the list
of phone numbers their neither
ever called as a last resort, things
did not seem to get that desperate;
aging gracefully, everything
vibrating with grace amidst the
currents and the surge that is filled
with shells and broken stones and grit,
it is a little like the ocean in that
way, the shimmer of it as it pulls
us apart, pulls us apart, pulls us apart.

There is also something reminiscent in Downs’ poems, the language and the casual, confident movements of words across the page, of the work of Ottawa-area poet Pearl Pirie: both share that exploration of movement and texture, talking sideways about something as a way to approach it head on; although Pirie engages a more overt language play over Downs’ noted comfort in utilizing familiar words to describe what might otherwise be unfamiliar (akin to Robert Creeley, perhaps, or even Richard Brautigan). There is something timeless in Downs’ work as well, meaning that a volume of work bridging such a temporal stretch still reads as incredibly immediate, as much as an important part of writing during an entirely different era. As DC-area poet and critic Heather Fuller, highlighting Downs’ 1998 poem “terry thought he’d been struck blind, but it was just a hallucination,” writes in her informative and charming introduction:

For those of us who do not demur from embracing poetry as a locus of meaning, the effect is intimate, heartbreaking, epiphanic. The punctuation and enjambment are deliberately precise. We pause; we take stock. We read on, with a sureness inspired by the lyric’s conviction.