Some protest & some watch walking on the other side by the hour some hold hands & some travel tell stories some are the stories some count for much longer and whose some, hello some, whose some. Hello. (Eunsong Kim)

I’ve long been an admirer of SUNY-Buffalo’s annual P-QUEUE (I’m still seeking copies of the first few volumes, if anyone has copies or suggestions of how to procure), and the latest, their “BLOOD” issue, Allison Cardon’s second volume as editor, includes new work by Biswamit Dwibedy, Joan Retallack, Eunsong Kim, Petra Kuppers, Travis Sharp, Renee Angle, erica kaufman and Soham Patel. Throughout its history, P-QUEUE has held to an idea of a loose “theme” for each volume—“Anomolies” (2), “Space” (6), “Polemic” (7), “Document” (8), “Mourning” (13) etcetera—an idea that has, throughout the journal’s five editors-to-date, has existed as a thread to connect sometimes disparate works, as opposed to any thematic bludgeon. Fundamentally, the strength of the writing has always propelled each volume, and has done so quite brilliantly. As Cardon writes to close her introduction:

In this, P-Queue’s fifteenth issue, blood conveys a wealth of information that is less in need of discovery than of care. As blood covers the intersection of history with finitude and relation, these poetic, polyvalent explorations of this viscious and revelatory bodily substance help us imagine a form of vitality disarticulated from blood’s labor time, net work, or progression. 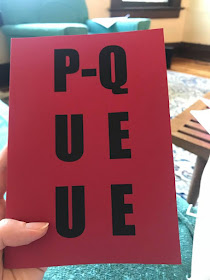 I’ve always been fond, also, of journals that provide enough space for a writer’s work to stretch out, and reveal itself, as opposed to including only a couple of pieces, or even a single poem (for the sake of getting in as many writers as possible). Even beyond the variety P-QUEUE is traditionally known for, I’ve appreciated the journal’s interest in including multiple pieces, even longer singular, extended works, by fewer authors. Highlights in this volume abound: erica kaufman’s work is stellar—sharp, rich and smart—writing: “when i say i’m driving through / mountains i mean not just words / or filth, skepticism, & pronouns. / staccato is ordinary reception / like rabies or powerpoint or generic / welcoming verbs who need punctuation.” (“Post Classic”). Eunsong Kim’s work is powerful, and makes me want more, as she opens the poem “Tithing”: “This city’s symbol a woman who killed her colonizer // Woman is euphemism for recorded state property.” The authors collected here write blood and discomfort, trauma and progress, and Cardon’s introduction outlines the issue both generally and specifically quite beautifully. Basically, there is plenty here worth paying attention to, continuing a strong presence for an annual I have long learned to pay attention to.

Alabama Is a State on Mars #3

In the hospital twice in two years, first a heart attack and now a mugging. Sitting in his van outside his daughter’s pharmacy, he is dragged out of it, pistol whipped, punched repeatedly, possibly kicked. Daughter and coworkers inside lock the door and call the police. In the hospital face already swollen beginning to bruise. He smiles when he sees me.

Now staying up late and with a machete under his chair. Now circling the yard with the machete. Now asking everyone in the house if they, too, saw that light across the lawn. A flashlight? Do you think it was a flashlight? (Travis Sharp)