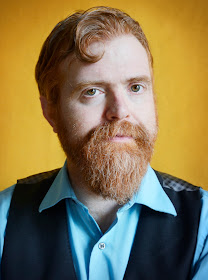 Mark Lamoureux lives in New Haven, CT. His work has been published in print and online in Elderly, Denver Quarterly, Jacket, Jacket2, Fourteen Hills and many others.  He is the author of 4 full-length collections of poems It’ll Never Be Over For Me (Black Radish Books, 2016), 29 Cheeseburgers + 39 Years (Pressed Wafer, 2013), Spectre (Black Radish Books, 2010) and Astrometry Organon (BlazeVOX Books, 2008). In 2014 he received the 2nd annual Ping Pong Poetry award, selected by David Shapiro, for his poem “Summerhenge/Winterhenge.” He teaches at Housatonic Community College in Bridgeport, CT.

Honestly, the only thing that happened for me with my first book was that I was relieved of the anxiety of worrying about publishing a book.  I think publishing can be sort of anticlimactic—we expect it to be this earth-shattering thing and it’s not really like that.  However, it is nice to have the work in the world physically in a form that is easy for people to access.  The books make their way into the world slowly, like glaciers; it’s difficult to see what the book accomplishes because it generally happens so slowly.  Of course, sometimes books get a lot of attention and a lot of hype very quickly, but this has never really been the case for me.

I tend to work mainly in the format of long projects, which provide a kind of scaffolding for my writing, so all of my books are very different from each other, both in style and content.  The only link between them, really, is that they were written by me.

I definitely started with poetry in terms of a writing practice that I did on my own; we write non-fiction by way of essays and the like in school, but I never really surreptitiously wrote essays until much later in my career.  I think I wrote a few terrible short stories in high school but have not really written much of them since.  If I were to try to write fiction, however, it probably would not be very different from my poetry.  My most recent book incorporates a lot of non-fiction elements, but I would still probably call those parts poems.  I think the fiction / non-fiction dichotomy is difficult to establish in poetry. It’s not necessarily that clear all the time in prose either.

My projects seem to develop at their own pace; I’m always starting projects—some of them come to fruition and some don’t.  My writing process is very improvisational—sometimes things will gestate in my head for a time, but oftentimes I just jot things down in a stream-of-consciousness way.  Then I make many small revisions generally over a long period of time, sometimes years.  I don’t take notes; I’m not sure I even know how I would do that.

I never really compose with oral performance in mind; I am definitely an on-the-page poet.  I enjoy doing readings, but the process doesn’t come naturally.  I have to practice extensively in advance and keep to a pretty strict “set-list.”  My affect is pretty flat by nature, so I even have to “practice” emoting sometimes.  I express myself mainly through words on the page and not so much physically or verbally—it’s just the kind of person I am.

I don’t really think about these things that much, to be honest.

I think writers tend crystallize elements of the general consciousness of the world, albeit in a very personal way.  Poets, in particular, fulfill a role similar to that of the shaman—looking into a special frame of consciousness that surrounds and perforates us all but certain people seem to have a harder time accessing; the poet functions to help lead people into this space, where it is important to go because that’s where the universe does a lot of its thinking.  We don’t do this enough in the larger culture and we are feeling the adverse effects of it.  Hopefully when society realizes it needs poets again, it won’t have killed us all.  Extinction of the poets will probably mean the extinction of the race itself, though.

I don’t work with outside editors.  Everyone needs a copyeditor because our brains are sometimes incapable of seeing our own typographical and grammatical mistakes.

I try to avoid advice because I am deeply anti-authoritarian and I might therefore ignore some very good ideas.  It’s better for me to figure things out myself.

How easy has it been for you to move between genres (poetry to translation)? What do you see as the appeal?

I love translation.  In translating one forms a very intimate bond with another mind and produces this special hybrid offspring—the joy in doing this is often greater than one’s own work because it is free of the self-loathing we often experience in regard to our own work.  Translating poetry is very similar to writing poetry, so it doesn’t require much of a mental shift—the hardest part is vocabulary, but otherwise it’s fairly intuitive.

Writing expository prose is completely different; it’s like swimming and walking, you’re still using your body but in an entirely different way.  The rules are different; the physics is different.

I abhor routines of all kinds.

I usually write in response to things—music, images, situations, objects.  I don’t really get stalled because there’s no shortage of any of these things in the world.

We live across the street from two famous and very busy apizza restaurants in New Haven, so on any given night the smell of pizza more or less permeates the whole area.  The word “apizza” was coined to differentiate the New Haven-style pizza from ordinary pizza.

All of those things—really, all of them.  I think all good poetry is very curious about the world.  I wouldn’t say that books come from books at all.

There are so many of them; it would be difficult for me to list them all. I think music is very important to me, both in my work and in my life, also visual art. I am listening to a lot of jazz right now, particularly Bill Evans and Clifford Brown.  I wrote a whole book responding to the work of Francesca Woodman and my current book is about songs and artists associated with the Northern Soul youth culture in Britain, so I guess you could say that all of these things are important to me.

I would like to write genre fiction of some kind: a detective novel or a science fiction novel or something like that.  Something short though, like a Raymond Chandler or a Ray Bradbury novel, not these ghastly interminable epics that are popular right now.

I am also a teacher and I think I probably would have wound up being a teacher even if I had not become a writer.  I love teaching, and it is the only sort of “job” that really makes sense to me.  Poetry was never any kind of decision I made, it’s just something I felt I had no choice but to do.  That sounds pretentious, but it’s true.

I think all books are great in their own way, even the ones I can’t stand; I drive people with an innate critical bent crazy.  Hierarchical enumeration of the quality of art of any kind really gets me riled up. I recently attended a conference about Victorian Women Writers and really enjoyed a lot of the work I encountered there, which I had been unfamiliar with: Augusta Webster, Amy Levy, Mathilde Blind, Michael Field and others.  I’m probably motivated mostly by novelty; I like new things, even when they’re old new things. I recently read a biography of Bill Evans that I liked a lot.  I read a lot of comic books also, but they don’t tend to stand out from each other very much.

I feel the same way about films; I have my favorites, but I really just enjoy movies generally. I like horror movies a lot, but I haven’t seen any very good ones recently.  I watched a documentary about people who live in Antarctica during the winter season that I found really fascinating for some reason.  I showed Jane Campion’s Bright Star in my British Literature class this semester, so re-watched that a few times—it’s a really good poetry film among really only a handful of decent poetry films.  Ancillary to that, I also read Tom Clark’s Junkets on a Sad Planet about Keats’ life, which I enjoyed a great deal as well.

I have been fiddling around with a manuscript called American Drone Doom, which is almost finished and about what it sounds like; drone doom is a style of heavy metal music, but it also refers to drones and doom generally.  I have also been writing poems in relation to/inspired by Leonard Nimoy’s old In Search Of television series from the ‘70s. That show really scared the hell out of me as a child; I’d run and hide in my room when that opening music came on, but now I love it.  It’s complete nonsense, but I love nonsense.