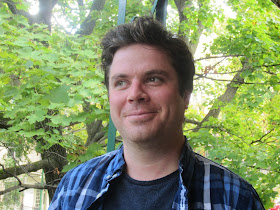 Mike Steeves lives with his wife and child in Montreal, and works as a fundraiser at Concordia University. Giving Up is his first novel. Connect with Steeves on Twitter @SteevesMike.

1 - How did your first book change your life? How does your most recent work compare to your previous? How does it feel different?
Giving Up is my first published book so it’s still unclear whether it will end up being a life-changing experience. As far as the difference between my current and previous work, I hope that the current work is better.

2 - How did you come to fiction first, as opposed to, say, poetry or non-fiction?
I guess because fiction is what I read growing up. If that’s what you’re taking in then I imagine that’s how you’re going to respond. But I also know that I loved stories. Some poems are stories, but they don’t have to be. Non-fiction was definitely not even on my radar. So I wanted to emulate and reply to the stuff that I was reading, and what I was reading was fiction.

3 - How long does it take to start any particular writing project? Does your writing initially come quickly, or is it a slow process? Do first drafts appear looking close to their final shape, or does your work come out of copious notes?
Giving Up took me two years to write. That’s not including the editing process – that took another year. Once I start writing, things come quickly, provided I stick to it and make time every day (or most days) to do an hour or two of work. I write without any idea of structure or plot so I just start and keep going until I think I’m done. The final version of Giving Up is close to the manuscript I submitted to the publisher, which is to say that there were no major changes or additions. Before I start work on a book I may spend many months not writing anything at all. I will read and feel anxious about not writing and occasionally take down notes and then I think what happens is my anxiety builds to a point where I can’t stand it anymore and then only way out is to start working.

4 - Where does fiction usually begin for you? Are you an author of short pieces that end up combining into a larger project, or are you working on a "book" from the very beginning?
I try to think of whatever I’m working on as a story. It’s either a long story or a short one. Most of my stories are longer ones. As I’m writing I start to think about just how long it’s going to be. So far, I’m typically not that far off the mark.

5 - Are public readings part of or counter to your creative process? Are you the sort of writer who enjoys doing readings?
I like reading because if it goes well then people will come up to you afterwards and say nice things and I love it when people say nice things to me. But it’s not part of the creative process and based on my limited experience it can be disruptive. I get very nervous and want to do a good job so weeks before the reading is going to take place I will find it hard to concentrate and will spend most of my time imagining how the reading is going to go. And then things go fine and I realize that I wasted weeks of my life worrying about it.

6 - Do you have any theoretical concerns behind your writing? What kinds of questions are you trying to answer with your work? What do you even think the current questions are?
When I’m writing I think I’m more concerned with the details – the ‘will this work’ mindset – but in the buildup or aftermath of writing I will definitely try to understand why I wanted to tell this particular story. In the case of Giving Up, the big concern was over the paradox between devoting oneself to an overarching goal, and how that goes against the demands of our everyday lives.

7 – What do you see the current role of the writer being in larger culture? Does s/he even have one? What do you think the role of the writer should be?
I think there are as many writers are there are roles. Some writers will see their role as one of explaining the world to their readers. Others will see themselves as primarily entertainers. Of course, these roles aren’t exclusive to each other. But it’s pretty clear that in North America the role of the writer has been reduced somewhat and they are no longer expected to be authorities on culture or politics. We have experts for that now. And so writers are often seen as paid entertainers providing cultural commodities and should be solely concerned with providing the maximum entertainment possible to the largest group of people possible. This is a perverse understanding of how literature works. Unfortunately this perspective is frequently endorsed by other writers and critics.

8 - Do you find the process of working with an outside editor difficult or essential (or both)?
There’s a huge difference between a manuscript that can be shared among friends and a finished book that can be sold over the counter. I can’t see how Giving Up could have ever made this transition without Malcolm Sutton. This is the great secret that all authors carry around with them – that books are a collaboration.

9 - What is the best piece of advice you've heard (not necessarily given to you directly)?
In order to write a book, you have to sit down and write it. Seems like this should be obvious, but many of us seem to forget it.

10 - What kind of writing routine do you tend to keep, or do you even have one? How does a typical day (for you) begin?
I have a day job so I write in the evenings. There’s not much of a routine to it. I just try to carve out an hour or two at the end of the night, after all the life-stuff has been tended to, and my goal is to get at least a page or two and to leave off in a place I’ll know I’ll be able to continue from the following night.

11 - When your writing gets stalled, where do you turn or return for (for lack of a better word) inspiration?
I read constantly. That helps. But for the most part, even if my writing isn’t going well, I will still continue to write. I may not be happy with what I’m doing, but eventually that changes and I start to feel okay again. When I’m not writing at all, as I mentioned above, that makes me anxious. Anxiety is all the inspiration I need.

12 - What fragrance reminds you of home?
Cleaning products.

13 - David W. McFadden once said that books come from books, but are there any other forms that influence your work, whether nature, music, science or visual art?
I love the music of John Coltrane and he has definitely served as an inspiration. Not so much the music, but simply his career, the ceaseless searching and experimenting in his work. And his integrity and devotion. All of that comes through in his beautiful playing. Also, I have been going to galleries for years. I love looking at paintings, even though I know very little about painting and visual art and can’t really talk about it, it still means a lot to me and I think some images have had an effect on my work. But what’s great is that it doesn’t have to be good in order to be influential. Flaubert was hugely affected by a painting of Saint Antione that I believe is universally considered to be a mediocre picture.

14 - What other writers or writings are important for your work, or simply your life outside of your work?
Dostoevsky is very important to me – both in my life and in my work.

15 - What would you like to do that you haven't yet done?
Everything.

16 - If you could pick any other occupation to attempt, what would it be? Or, alternately, what do you think you would have ended up doing had you not been a writer?
I’d like to be a detective. Not in real life though, just make-believe.

17 - What made you write, as opposed to doing something else?
I wish I had an edifying response to this question but I believe I started to write because I thought it would make me famous, and I believed that being famous was a way to avoid death. Wrong on both counts.

18 - What was the last great book you read? What was the last great film?
There’s so many great books that it’s possible to read them almost exclusively. I just finished a collection of Tolstoy stories – the Pevear/Volokhonsky translation – that was unquestionably great. His story – The Death of Ivan Ilyich – is a harrowing and courageous look at the experience of dying. The Kreutzer Sonata is simply crazy. One of the craziest texts I have ever read, and I read the 9/11 Commission Report. As far as movies go, I watched John Ford’s Young Mr.Lincoln recently and it was a revelation.

19 - What are you currently working on?
I’m writing a story that takes place during a professional development workshop. It’s extremely violent.