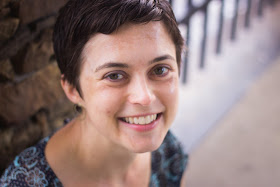 Amelia Martens is the author of The Spoons in the Grass are There To Dig a Moat, a book of prose poems selected by Sarabande Books for the 2014 Linda Bruckheimer Series in Kentucky Literature. Her chapbooks include: Purgatory (Black Lawrence Press, 2012), Clatter (Floating Wolf Quarterly, 2013), and A Series of Faults (Finishing Line Press, 2014). She met her husband in the Indiana University MFA program; together they have created the Rivertown Reading Series, Exit 7: A Journal of Literature and Art, and two awesome daughters.

1 - How did your first book or chapbook change your life? How does your most recent work compare to your previous? How does it feel different?
My first book, which came out in April 2016, makes me feel like I moved up a level, like I belong here, being a writer. My first chapbook had a similar influence and helped validate my work. Now that the book is out, I’ve been invited to panels, to teach at conferences, and to give readings. The book feels different because people react to it differently, because of my own investments in the idea of a book, because it’s a tangible example of my capabilities.

2 - How did you come to poetry first, as opposed to, say, fiction or non-fiction?
Being a twin, words have several meanings and those meanings are flexible within a structured code. Maybe that’s true for all humans, I don’t know. I think my twinship influenced me to use fewer words than other people because I was linguistically intimately understood. Poetry is concentrated—each word matters. Fiction seems to need people, need development, arcs, and lots of moving pieces. My first year of college I wrote a good-sized short story—with no dialogue, and that sort of confirmed things. Non-fiction is a growing interest for me as I see some topics that I don’t think I can convey in poems the way I’d like to—they might lend themselves more to micro-essays? We shall see.

3 - How long does it take to start any particular writing project? Does your writing initially come quickly, or is it a slow process? Do first drafts appear looking close to their final shape, or does your work come out of copious notes?
I’m damned the moment I start thinking about my writing as a project. I can see and talk about my work in project terms after I’m finished (or think I’m finished). If I can just write and make a pile of pages and pretend that all it is, then I write fairly quickly. If I think too much about the project, it’s over. I’m trying to nurture my drafting process. My first draft is usually close to final, or it goes into the discard pile. I know there are a lot of good bits and pieces sitting in that pile, if I had the patience to get them back out and work them over.

4 - Where does a poem usually begin for you? Are you an author of short pieces that end up combining into a larger project, or are you working on a "book" from the very beginning?
Many poems being for me in sound, a phrase said aloud an odd juxtaposition of images. I also mishear people all the time and it’s wonderful.

I’m working on one poem at a time and I’ll keep writing in one vein until that goes dry, then get hooked by something else and follow that along. I could not have written a book if I thought it was a book while I was writing the poems.

5 - Are public readings part of or counter to your creative process? Are you the sort of writer who enjoys doing readings?
Reading aloud is a great chance to celebrate the poem’s sound (rhythm, spacing, etc.). I love to do readings because I learn about the poems. I have to admit a word or piece of punctuation doesn’t work or come to an understanding that these poems read well to an audience and these are better to look at alone on the page. When people read the poems to themselves it’s a different experience; they’re celebrating the visual arrangement, the look of the words in addition to the sound in their heads.

6 - Do you have any theoretical concerns behind your writing? What kinds of questions are you trying to answer with your work? What do you even think the current questions are?
I am interested in women’s voices and the complex experiences women, especially mothers have that are not regularly discussed. Holly Iglesias has suggested that the female prose poem might be it’s own separate form. I wonder how much what we think of as the standard form, any standard form, is really just the male standard. In every sector, women have been mistreated due to their non-conformity to the male-norm; from heart attacks to a lack of pockets, women are the constant other—what does this look like in poetry?

I am trying to answer my own questions, and they are big ones: Why are we here? What are we doing? How are we going to survive? What does it mean to be a female American human in the twenty first century? What parts of life need more attention and how do I show those to readers in ways that are compelling?

7 – What do you see the current role of the writer being in larger culture? Does s/he even have one? What do you think the role of the writer should be?
I see the writer as vital meaning-maker, meaning-reflector, question-asker, holder-of-signs, recorder-of-woe-and-wonder. Who knows what of our groups of human will get passed on—what will be our cave-paintings? Maybe language. Maybe these symbols we ascribe so much meaning that people kill and are killed for the side of a word they come down upon. The writer is a processor of experience, the spark of insight, one way we communicate human experiences across time; in this area writers and artists are the same.

8 - Do you find the process of working with an outside editor difficult or essential (or both)?
Terrifying in the way you know something is good for you. Change is hard and painful. Being edited is being told you need to consider change. I had a fantastic and vital experience with Sarabande; nearly every poem had some edits suggested. I was unprepared for this experience; I somehow thought I was done with the book once it was accepted for publication. So not true. Sarah Gorham, Jeffery Skinner, and Kirsten Miller all read my manuscript and made suggestions. Then it went through a more proof-level stage of edits—did I mean this word as a verb? And on the flipside: the book came out with no threads sticking out. Those poems needed other eyes upon their lines. Essential, though not painless.

9 - What is the best piece of advice you've heard (not necessarily given to you directly)?
Related to writing: Make room for the reader in the poem. Think about where a door can be made, a window opened, a spot for the reader to join in the image/meaning-making exchange.

10 - How easy has it been for you to move between genres (poetry to critical prose)? What do you see as the appeal?
I tend to write everything like a poem, so even when I’m working on a book review it leans toward sounding like a poem and some times I have to go back and pull it apart a little more so there are actual sentences. Other than reviews, I haven’t much tried to move between genres and I hope, when I try this, it works out. I have some ideas that seem like they might need to be in essay form to be properly illuminated.

11 - What kind of writing routine do you tend to keep, or do you even have one? How does a typical day (for you) begin?
With two young children, several part-time jobs, an everlasting mountain range of dishes, laundry, and dust bunnies—I’m doing my best to get to my desk at any random moment and write down what’s in my head. I also take notes and this keeps me losing idea threads, which kills me when it happens. A typical day begins with our 3 year-old poking me in the face with my glasses and telling me it’s morning time! (Kid, those are streetlights!)

12 - When your writing gets stalled, where do you turn or return for (for lack of a better word) inspiration?
Other poets. I read, read, read. Fiction. Non-fiction. I turn on the radio; I listen to people’s passing conversations. I start looking for threads in images that come into vision throughout the day. I go outside and dig a hole and remember I’m just a person on Earth.

14 - David W. McFadden once said that books come from books, but are there any other forms that influence your work, whether nature, music, science or visual art?
Yes. All of the above. I am enthralled by the details of science, and by the variety and imagination of visual art. The power to make images across language barriers, which is part of the magic of visual art and of music—a poem does something else. It is both visual and auditory, but it is limited by language. I love museums. I love watching people work in their talent area, whatever it might be, to see passion at play is powerful.

16 - What would you like to do that you haven't yet done?
Travel extensively outside the United States. And learn to play an instrument well enough to just be able to pick it up and play enjoyable music.

17 - If you could pick any other occupation to attempt, what would it be? Or, alternately, what do you think you would have ended up doing had you not been a writer?
My mom always said I’d be a lawyer. I need to do meaningful work, so if I wasn’t writing, I would need to do something helpful—to other people, or for the environment. I’ve always thought I’d make a good park ranger.

18 - What made you write, as opposed to doing something else?
The solitary and public experience of language. The sound of words has always been important. Probably being a twin is crucial to me being a writer; wordplay has been ongoing since there was always someone with which to make and test language. The ability to support my point of view was incredibly important growing up in our house; your argument had to be sound and therefore, your word choice was critical. I am also terrible at math.

Beasts of the Southern Wild (2012); we have two young daughters, so this is the last film I can remember seeing in a theater and it was fantastic.

20 - What are you currently working on?
Poems. Life. Kids. Tolerance.