Alex Leslie, The Things I Heard About You

The book that dreams all the names swollen green and black and yellow. Watermarks, birthmarks, names left out in the rainforest grow a new spore body, spine slipped by the pages that broke out. Popped a disc, the book staggers. No cellphone reception, the man in the store called Store heaves an eyebrow at my story. I open the phone book on the island where you now live. Open it, exhume pulp rot, head stuffed with wet leaves. An island where everybody knows each other’s name, your address it the place where the index is left to become microbe, become feast. Centres of pages mauled out, sections of letters (half the Ks, a few pages of Ps). After the cancer you decided you’d seen the worst. You decided to be positive and therefore become humourless. Moved to this place. Fell away. I turn the heavy edges. Where the names slope and wilt. My hands slow at the pages before your name. Qu Que—I’ve heard how different you are now, survivor, washed. I find your name, untouched by green, crossed out by a human hand. 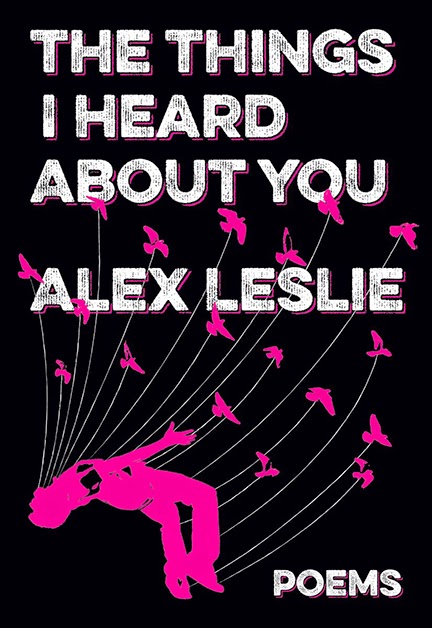 Vancouver writer Alex Leslie’s first trade poetry collection, The Things I Heard About You (Gibsons BC: Nightwood Editions, 2014), is a book constructed as a narrative exploration in precision, excision and the variation. Originally titled “I know how small a story can be,” the book is constructed out of a series of single paragraph prose poems, each with a subsequent ripple of two or three poems that follow utilizing the same language, but incredibly boiled down, including the occasional end-piece made up of a single, short sentence. Combined with a prior chapbook of microfictions, 20 Objects for the New World (Vancouver BC: Nomados, 2011) and trade collection of short stories, People Who Disappear (Calgary AB: Freehand Books, 2012), Leslie gives the appearance of having an ongoing interest in utilizing condensed prose forms, and the poems in The Things I Heard About You seem to exist in a curious boundary between the prose poem and the short story. Each piece is thick with narrative, yet openly lyric, and incredibly dense. Given the explorations into multiple tellings, each denser than the last, there are echoes of the reworkings of Toronto poet Margaret Christakos, specifically in the reworkings-as-chorus-codas of her What Stirs (Toronto ON: Coach House Books, 2008) [see my review of such here] that play the same language as the main piece to remark, boil down and further examine what has already occurred.

The names by watermark, by birthmark, rainforest book body popped, cell store. I open the story at cancer, exhume an island where everybody is index, where you left to maul wet loss. Therefore place fell away. I edge the wilt, slow at different cold. Left to this, I find you by hand.

What makes the poem-sequences, even poem-breakdowns, of The Things I Heard About You so intriguing is in how Leslie works to not boil down per se but to extract, creating new poems in the variations as much as continuations of each base piece. The strength, and the innovation, comes from that very variety, seeing just what is possible in the space within, and even between, each piece. The final poem in the four-poem “Pacific Phone Book” (the first two appear above) reads:

Dreamed you crossed and washed me.