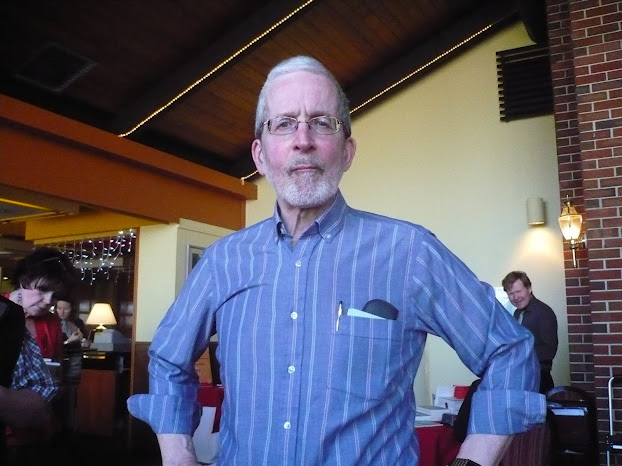 [Doug Barbour during the Edmonton launch of University of Alberta Press poetry titles by myself, Robert Kroetsch and Alice Major, 2010]

I’ve already spent half the day resisting the writing of this, but Edmonton poet, editor, publisher, critic and general literary enthusiast Douglas Barbour passed away this week, after an extended illness. He was an accomplished and easily underappreciated poet, and one of the finest literary critics that Canada has produced, something that was also less appreciated over the years than it should have been. As part of editing the feature “Douglas Barbour at 70” for Jacket Magazine in 2009, I wrote a bit about Doug’s work, and my own frustration with seeing how his work should have garnered far more appreciation than it did. He was well-known, well-loved and well-read in the Canadian prairies, but seemingly not much beyond that (although he had a number of conversations and engagements with New Zealand and Australian poets). His enthusiasm for poetry, jazz, science fiction and speculative fiction, as Andy Weaver suggested over Twitter yesterday, was unwavering over the years, and it took very little to get him talking excitedly about any of those subjects. There was always a kindness, an openness and an enthusiasm with Doug, and an involvement in the literary culture around him, even through his involvement over the past decade or so with Edmonton’s Olive Reading Series, or returning to being more involved with NeWest Press a decade or so back, due to some unexpected staffing changes. He showed up to do the work that so many writers and readers tend not to think about, and take for granted. As I understood it, he was instrumental behind-the-scenes in not only advocating for me to be writer-in-residence at the University of Alberta back in 2007, but in subsequently assisting in getting my Edmonton poetry manuscript, wild horses (2010), accepted by the University of Alberta Press. I’m sure there are dozens upon dozens of writers across the country that are able to have careers thanks to the support, encouragement and advocacy of Douglas Barbour, happily and enthusiastically (and slightly distractedly) doing all the invisible work that is required for a healthy and sustained literary culture, all while continuing to teach, and produce his own work. I would fully expect that retirement simply meant he was no less busy, but simply engaged with other kinds of activity.

I first met Doug in in Edmonton in the summer of 1997, during my first cross-Canada reading tour, touring from Ottawa to Vancouver with little to no spending money, but a box of various above/ground press chapbooks I aimed to distribute all across the country. I’d already spent a night or so staying with Edmonton poet Michael Londry and his mother, spending time in conversation with Michael, and meeting Lori Emerson, and was to spend another day or two with Tim Bowling before catching the next train heading west, into Kamloops. Doug and I had arranged to meet for an afternoon, during which he would transport me from the Londry house to the Bowling apartment: myself and my mound of chapbooks. That afternoon, he became one of above/ground press’ earliest subscribers, handing me a cheque for $100, even as he expressed frustration that he couldn’t get his own work published—I did try to convince him that if he could afford to give me $100, he could afford to start publishing his own chapbooks, to no avail. It would be some time before I discovered that he was one of the founding members of NeWest Press. Even now, I don’t really understand why he was having so much difficulty.

Around 2006, I ended up reading in Calgary with Doug, driving down from Edmonton and back again. Given the VIA line lands in Edmonton but not further south, I’d always done reading tours landing in Calgary with someone from Edmonton, offering to land us both a gig if my co-reader could assist with travel. Once Andy Weaver left Edmonton for Toronto (he and I had done at least one if not two jaunts south for readings), to teach at York University, I suggested Doug and I drive down in his car, which he was completely up for. Doug talked non-stop the whole drive in each direction, offering through conversation what felt like two separate three-and-a-half hour lectures on poetry and poetics. His insights and commentary, and enthusiasm for discussion, were both incredible and exhausting. I could barely get a word in (and I think as part of at least one of those jaunts I’d been hoping to get some sleep, worn out from the activities of the night prior). Although my recollections also having him stay overnight in Calgary in someone’s basement apartment, possibly kevin mcpherson eckhoff’s. My recollection has whomever hosted him that night extremely humbled and excited to be able to host him.

As a writer, he was always game for trying different things, from his ongoing collaborations with Arizona poet Sheila Murphy that resulted in two trade collections, Continuations and Continuations 2 [see my review of such here; see my interview with the two of them on same here at Touch the Donkey] to his own experimentation with form and breath, most recently seen through his poetry collection Listen. If (University of Alberta Press, 2017) [see my review of such here]. I’m not sure what he’d been working on over the past decade or so [although I did manage to interview him earlier this year via Touch the Donkey]. Any conversation of what he may or may not have been working on, at any time, prompted a list of projects, some of which had been ongoing for years. I’d attempted multiple times to get another chapbook manuscript out of him for above/ground press, having produced his chapbook It’s over is it over: Love’s Fragmented Narrative in 2005, and Wednesdays’ in 2008, as part of the online (since disappeared from the internet) “ALBERTA SERIES” from my writer-in-residence year, as well as the first three sections of Doug and Sheila’s “Continuations” series as an issue of STANZAS magazine (issue #30, 2002), but nothing else. I checked in with him every few years, but he didn’t have anything right now, he was busy with other things, he would think about it, etcetera, and nothing ever came of it. I would suspect he was far too busy engaged with the work of others, whether as reviewer, editor, mentor or publisher. He was always in a thousand different directions at once. Even during my Edmonton year, when I’d hoped to actually be able to spend more time with him in person, I could barely manage to catch him beyond seeing him at a literary event (although he seemed to make it out to every one).

It was Doug who taught me the real value in exchanging books with other writers: the ability to connect with writers outside of Canada. It was far cheaper to get a copy of a book by an American, Australian or New Zealand poet, he suggested, by offering to exchange books through the mail. Apparently he’d been doing this for years, which had, in part, allowed his work to garner more appreciation, one might think, outside of Canada than from within. And consider how it was only through his enthusiastic and communal engagement as a reader that he was able to push any sort of self-promotion. Literature for him was very much the conversation that Robert Kroetsch had offered it, so many years prior. And I, along with many others, I know, am very much going to miss his voice.

Posted by rob mclennan at 8:31 AM
Labels: Douglas Barbour, obituary

RIP Doug. His intelligence and heart will be greatly missed.

Beautiful tribute, Rob. Doug was the best, and his legacy is a gift to us. I am grateful for all he did for so many. His friendship and his writing along with his deep understanding of art and literature brought light always. And the light continues to warm.

Thank you for writing this beautiful tribute Rob. Doug was a generous and kind teacher. He supervised my honours thesis at UofA. I wrote about Phyllis Webb’s poetry. He sent her a copy. And when I graduated, he presented me with a lovely handwritten note from her. It was really an incredible thing for him to do.