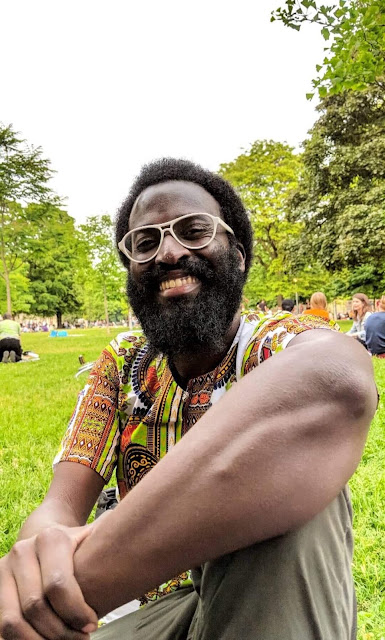 Mugabi Byenkya is a writer, poet and occasional rapper. He was born in Nigeria, to Ugandan parents and is currently based between Kampala and Toronto.
Mugabi was longlisted for the Babishai Niwe Poetry Award in 2015. His essays and poetry have been published in The Good Men Project, African Writer, Arts and Africa and The Kalahari Review, among others. He has been interviewed on Voice of America, NTV Uganda, and Brittle Paper, among other media outlets.
Mugabi's writing is used to teach international high school English reading comprehension. His debut experimental epistolary speculative novel, ‘Dear Philomena,’ was published in 2017 and he recently concluded a 42 city, 4 country North America/East Africa tour in support of this. In 2018, Mugabi was named one of 56 writers who has contributed to his native Uganda’s literary heritage in the 56 years since independence by Writivism. Dear Philomena, was named a Ugandan bestseller in the same year.
Mugabi wants to be Jaden Smith when he grows up.

My first book was written to face my impending death. I was given a year left to live by the doctors and started writing as a last-minute attempt to fulfil a lifelong dream. I have yearned for a career as an author since I was 4 years old but was pushed out of it and encouraged to write on the side due to my community’s desire for me to have a more sustainable and practical career in STEM. Facing my impending death, unemployed and suffering from various debilitating chronic illnesses, I figured there was no better time than the present to write that book! Fast forward to 4 years later: I’m not dead, have significantly better mental health, managed to publish my debut epistolary experimental speculative novel to critical and commercial acclaim and have toured through 42 cities thus far establishing a career as an author.

I actually came to fiction first but this was as a child before I was writing and performing professionally. I came to poetry first professionally through rap. My older brother is an incredible rapper/singer/songwriter who I consider one of my favourite writers and look up to immensely. I started rapping because I wanted to be like my older brother but I had a lot of difficulty finding a producer to work with long term. Poetry was therefore a natural progression as it’s essentially acapella rap. As my brother once told me, “Rhythm And Poetry is what makes up the R.A.P”

This depends on the length of the writing project. Poetry and essays come to me quickly but longer form writing projects come very uniquely, some come slow, others come quick. My first drafts tend to be incredibly verbose and significantly longer than their final shape because I make copious notes for later edits during the writing process. For example, my first draft of ‘Dear Philomena’ was 600+ pages while the final product was 216 pages.

I’m definitely an author of short pieces that I end up combining into a larger project as far as my books are concerned. ‘Dear Philomena,’ started as a series of letters that I was writing for catharsis and my second book that I’m currently working on started as disparate entities that came together over time. My poems however, are usually outlined from the very beginning.

I come from a performance background through rap and spoken word poetry so I LOVE doing public readings and they contribute significantly to my creative process. As I stated earlier, my older brother is a musician who comes from an older tradition. In recent years, due to the democratization of the internet, more musicians are blowing up off a viral hit/project with next to no performance history. I’ve seen people go on national tours that are their first times performing to an audience. My brother is the complete opposite who recognizes that writing a song is very a different process from recording a song in the studio which is a very different process from performing a song on stage. He strives to hone and develop his craft in all these disparate skillsets which is an attitude that he raised me with and I carry through my writing as they all complement each other.

My writing is often infantilized. It is seen by some as simplistic and lacking depth because I prioritize accessibility and centring marginalized bodies. I find this to be incredibly ableist as one of the theoretical concerns behind my writing, is creating literature that is accessible to folks of different abilities. My writing engages non-native English speakers, people who don’t read books and neurodivergent folks who haven’t read books in years due to inaccessibility. My writing gives readers the choice of how deep they want to dive rather than making that choice for them.

I see the current role of the writer as whatever the individual writer determines it to be. Being cognizant of not taking up space unjustly when the torch should be passed to others and not telling a story when it is not yours to tell.

I’ve been blessed that all outside editors I’ve worked with have been essential and caring, providing me much needed perspective as I create and inhabit my writing which skews my perspective.

I write significantly more poetry than I do any other genre but moving between genres is refreshing as it gives me the opportunity to rest certain writing muscles and explore others.

I don’t have a consistent writing routing as I don’t have typical days due to the unpredictable nature of my disabilities/self-employment. However, I do have this 😊

A simmering pot of groundnut sauce

The cadences employed by rapper Ab-Soul, the brush strokes of artist James Michael Yeboah and the brash trumpeting of Knott Rudy among others.

‘Trauma Head’ by Elee Kraljii Gardiner. She doesn’t bother explaining, situating or putting a disclaimer for able-bodied folks. Instead, she writes centring disabled and neurodivergent life in such a refreshing way that I had yet to read. She’s the definition of For Us, By Us.

The last great film I saw was John Wick 2 because Keanu Reeves is a badass with bulletproof suits and all the fanciest guns in the world but cracked his phone screen because he didn’t have a case.

I’m currently working on my second book, planning the final leg of my book tour and incorporating more deliberate rest into my hectic weeks.