It is the season of warmth, colorful lights line the houses. Words hearth and
mirth arise. But now a weight grows heavily on our chest, like pneumonia.

Lungs unraveling. Therefore language unraveling. I go for walks in the
neighborhood and gather loose threads from the city’s unhappy bodies. I find

violet threads strung into the nests of birds. Long red threads with the texture
of yarn. Short, fine, yellow threads, barely visible. I store these threads of

collective bodies in wooden jewelry boxes which contain many compartments.
All of the yellow thoughts, all of the blue intertwining all a small lake. (“NESTS OF MAMMALS”)

I’ve been eager for some time to see new work from Denver, Colorado poet Andrea Rexilius, rewarded with both a new title, Sister Urn (Portland OR: Sidebrow Books, 2019), and another already announced for next spring, The Way the Language Was (Letter Machine Editions, 2020). Rexilius is also the author of To Be Human Is To Be a Conversation (Rescue Press, 2011), Half of What They Carried Flew Away (Letter Machine Editions, 2012) [see my review of such here] and New Organism: Essais (Letter Machine Editions, 2014) [see my review of such here]. It is interesting to note dates on such, suggesting her books are composed in bursts, which also might suggest less of a trajectory of books composed consecutively, but concurrently (admittedly, this is entirely speculative). In an interview conducted by Amanda Ngoho Reavey, posted on the Woodland Pattern website on February 25, 2015, Rexilius speaks to the interconnectivity of her writing in general, responding:

AR: To weave again into the previous question, I secretly define my poetics, my pedagogy, my way of being in the world as “to be human is to be a conversation.” What this means is that my previous thinking, previous being, previous experiences are always becoming new, rethought, reconsidered in the present moment and on into the future. A conversation keeps turning, keeps asking questions, keeps thinking in the moment, demonstrating the ecstatic (human), as opposed to the static (not human). In this way I do not think of my books as separate from each other. But at the same time, I do also think of them as discreet documents that can be read separately from one another, or in any order really. They are demonstrative of a rhizomatic style of writing. For instance, the third book answers the question “What is the relationship between the text and the body in your writing?” that the first book leaves blank. I think of the answer as coming from the third book, in relation to the thinking inherent in that book, as opposed to the thinking of the first book, but I simultaneously see the way the third book is in conversation with the first one not just through this question, but in the way that it considers, in particular, research and relationship. In this way it extends upon and answers back to the first (and second) book. My most recent project also reaches back into this larger conversation by picking up the thread of gesture and residue. In other words, each book opens a detailed nuance of the larger whole. What that whole is doesn’t really matter, or it is “the conversation” whose center point is always evolving. 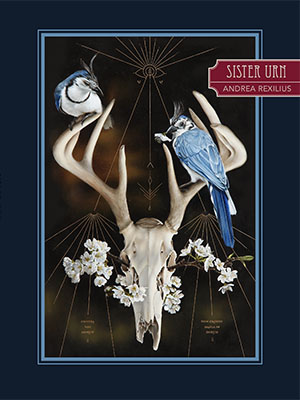 Contemporary to that interview, she includes this as the opening paragraph to her statement introducing her work in the anthology The Volta Book of Poets (SideBrow Books, 2015) [see my review of such here]:

I’ve long admired Rexilius’ ability to blend the essay, long poem and lyric/prose poem traditions enough that all exist equally, shifting and turning through a sequence of lyric examinations, much of which focuses on concern both human and ecological, whether large or intimate, and the ways in which language and the body impact upon another.

There are stories about the things human store in trees. I found a human
Heart, spirit of a sleeping girl, journal of a dying witch, Amen. This is the

story of our other life. Eric is an herbalist and I am a bird. I kneel down in
front of a book and weep. It is brown and thin, like the Fox River. It tells a

story of women burnt to the ground. Smart, independent women who read
books, who study plans, who give birth, who understand phases of the

moon and know the ocean’ relationship to blood. The world is not flat in
their notebooks. Their wisdom a form of casting flies. Even as a young girl,

I knew these women. I felt I was one of them. (“NESTS OF MAMMALS”)

Composed in two sections—“SISTER URN” and “NESTS OF MAMMALS”—her opening, title section explores the grief exposed when a sibling dies, her sister Andrea, for whom the book is dedicated. The section opens with a prose poem, moving into a series of short lyric bursts on loss, grief and memory, writing, as in the title poem itself, “The direction of any map as its climate. / I’m the unmoored space beneath what you’ve weathered. / You’re the beautiful crumpled terrain […].” Her precision is powerful, palpable and understated, as noted in this poem, which sits near the beginning of the first section:

Who cross into orphanages of air
find flight. The flightless
carve spaces, remove need.
Ghost the expanse.
walls, windows
into the next.

Some say a thick black line.
Drawn taut against the curvature,
an etching into
cut open round bowl,
a god’s home. Meridian.

Beneath the roots
of a fallen tree. See.