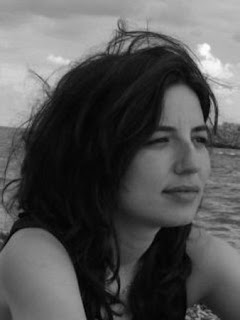 Helen Hajnoczky's poetry has appeared in fillingStation, Matrix, NoD, Rampike, and Speechless magazines, as well as in a variety of chapbooks. She has served as assistant editor of NoD magazine, as poetry editor of fillingStation magazine, and is a weekly contributor to the literary blog Lemon Hound. She lives in Montreal where she is working on an MA in Middle English literature. Her first book, Poets and Killers: A Life in Advertising, will be available in November from Snare Books.

Natasha Nuhanovic was born in 1984 in Zagreb, Croatia. At nine, she moved to Germany, and at fourteen, to Canada. Natasha completed an Honours B.A. in English and German Literature at the University of Waterloo and an M.A. in Comparative Literature at the University of Toronto. Her poems have been published in literary journals in Germany, Bosnia and Canada, and in the chapbook Painted Photographs (2005). She has translated poems from and into German, English and Serbo-Croatian. Stray Dog Embassy (Mansfield Press, 2010), is her first full-length book.

Suzanne (Sue) Bowness's first book of poetry, The Days You've Spent, was published in 2010 by Tightrope Books. Her poetry has previously been published in journals including the Literary Review of Canada and Pagitica. Her play The Reading Circle is a past winner of the Ottawa Little Theatre's National One-Act Playwriting Competition (2006). She is a freelance writer and editor online at www.codeword.ca.

Peter Gibbon has been living and writing in Ottawa for the past seven years. A longtime editor at In/Words Magazine & Press, a former host of the In/Words Monthly Open-mic series, and recent recipient of an M.A. in Canadian Studies, he is plotting a new little magazine, CONDUIT (due out in Spring 2011). Recent chapbooks include eating thistles (Apt. 9 Press 2010) Blizzard: Ottawa City Stories (In/Words 2009, with Jeff Blackman) and three poems (HORSEBROKE 2009).